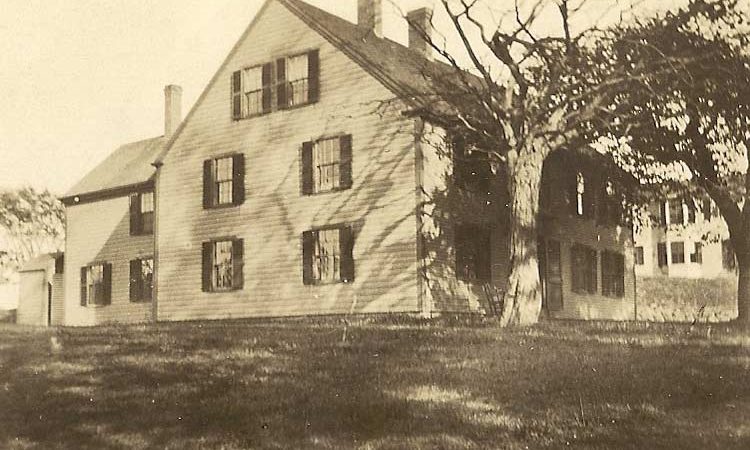 Mirror mirror on the wall, who’s the OLDEST of them all…?

Sturgis Library receives visitors from across the country who have come to explore their Cape Cod roots and pay homage to their Cape Cod ancestors. Hundreds of members of the Lothrop and Sturgis families visit us each year, and members of the staff are continually answering the question: “Is this really the oldest library in the United States?”

The answer isn’t quite that simple. Constructed in 1644 for the Reverend John Lothrop, founder of Barnstable, the house which forms the original part of the Library is the oldest building housing a public library in the United States. The building is also one of the oldest houses remaining on Cape Cod. Since Reverend Lothrop used the front room of the house for public worship, another distinction of the Sturgis Library is that it is the oldest structure still standing in America where religious services were regularly held. This room, now called “The Lothrop Room,” with its beamed ceiling and pumpkin-colored wide-board floors, retains the quintessential early character of authentic Cape Cod houses.

But we were interested to know which library was truly the oldest. While we may have the oldest building, others have their own unique claim to fame. Here’s what we found in our quest for the truth:

According to History Magazine, “the oldest library in America began with a 400-book donation by a Massachusetts clergyman, John Harvard, to a new university that eventually honored him by adopting his name. Another clergyman, Thomas Bray from England, established the first free lending libraries in the American Colonie s in the late 1600s. Subscription libraries – where member dues paid for book purchases and borrowing privileges were free – debuted in the 1700s. In 1731, Ben Franklin and others founded the first such library, the Library Company of Philadelphia. The initial collection of the Library of Congress was in ashes after the British burned it during the War of 1812. The library bought Thomas Jefferson’s vast collection in 1815 and used that as a foundation to rebuild.  It wasn’t until waves of immigration and the philosophy of free public education for children that public libraries spread in the US. The first public library in the country opened in Peterborough, New Hampshire, in 1833. Philanthropist Andrew Carnegie helped build more than 1,700 public libraries in the US between 1881 and 1919.”

The Darby Free Library in Darby, Pennsylvania, is “America’s oldest public library, in continuous service since 1743.”

Peterborough Town Library in Peterborough, New Hampshire, was the first tax-supported free public library not only in the United States but the world. The library was established in 1833 by a vote of the town led by Dr. Abiel Abbot, a minister who stirred the community’s intellectual life with respect to books and reading. Originally housed in a storefront, the library moved to its final location in 1893, where it remains today. The principle upon which it was founded continues to spread across the civilized globe. It was incorporated in 1833 and its building opened in 1893.

The Scoville Memorial Library in Salisbury CT also makes a claim as first publicly funded library in the United States. It was established in 1803 and the first library to be opened to the public free of charge.

The Boston Public Library holds a number of “first” distinctions. In addition to being the first publicly supported free municipal library in the world, it was the first library to establish space designated specifically for children. It claims that it also is the only public library in the country that also serves as a Presidential Library, since their holdings include the papers of John Adams. However, the Forbes Library in Northampton, Massachusetts might dispute this claim, since they also claim to be the only public library in the United States to hold a Presidential collection. Their library holds the papers of President Calvin Coolidge.

The Franklin Public Library in Franklin, Massachusetts is America’s first lending library. In 1778, when the town was incorporated, the designated name Exeter was changed to Franklin in honor of Dr. Benjamin Franklin. When asked to donate a bell, Franklin responded with an offer of books for the town’s residents, acknowledging that “sense” was preferable to “sound.” The original Franklin collection is still housed in a bookcase in the library.

The Redwood Library and Athenæum of Newport, Rhode Island says it is the oldest lending library in America, and the oldest library building in continuous use in the country. Founded in 1747 by forty-six proprietors upon the principle of “having nothing in view but the good of mankind,” its mission continues over 250 years later.

The Library Company of Philadelphia, founded in 1731 by Benjamin Franklin and a group of his friends, became the first American subscription library. The Library Company, while founded as a membership library, did allow members to borrow books, and so may have been the first truly public library. It is still in existence as a nonprofit, independent research library.

The Brumback Public Library in Van Wert, Ohio, dedicated in 1901, is the oldest county library in the United States.

Biblioteca Palafoxiana in Mexico calls itself the “First Library of the Americas.”  A Mexico travel site suggestes that “while exploring the streets of Puebla’s historic downtown, take some time to visit the oldest public library in the Americas. The Biblioteca Palafoxiana (Palafoxian Library) besides being an important historical and cultural treasure, is also an important repository of learning. The collection comprises over 40,000 books, the majority of them dating from before Mexico’s independence, including many incunabula. The beautifully restored library is extraordinary in that the collection is conserved in its original location along with the original bookshelves….The Biblioteca Palafoxiana’s namesake, Juan Palafox y Mendoza, was bishop of Puebla from 1640 to 1655, and served as viceroy of New Spain. In 1646 he donated 5000 books from his private collection to the seminary of the Colegio de San Juan. He made the donation with the stipulation that the books be available to any literate person, and not just academics, thus establishing the first public library of the Americas. In 1773, Bishop Francisco Fabian y Fuero commissioned bookshelves made of finely carved cedar, ayacahuite pine, and coloyote wood to house the library’s growing collection. An additional tier of shelving was added in the 1800s….The former Colegio de San Juan is now home to Puebla’s Casa de la Cultura cultural center, but the Biblioteca Palafoxiana remains in its original location on the second floor. It occupies a long vaulted hall with a splendid altarpiece from the mid 14th century gracing the far end. The altarpiece is covered with gold leaf, and the center is dominated by a painting of the Madonna of Trapani by Sicilian master Nino Pisano. The library has been recognized for its antiquity, originality and artistic value: in 1981, the Mexican government declared it a historic monument and in 2005, UNESCO added it to the Memory of the World list.”

Though no longer standing, one website states that “the St. Phillips Episcopal Church Parsonage Provincial Library in Charleston, South Carolina, was founded in 1698. It was the first public lending library in the American Colonies.”

Do you know of other public library firsts? Is your library the “oldest of them all?” If so, please let us know, and we’ll post your information on this page. Contact Lucy Loomis, Library Director, at (508) 362-6636 or by email at sturgislibrary@comcast.net.