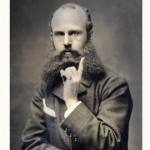 Bigelow was William Sturgis’ grandson, and served as Trustee of the Sturgis Library. He trained as a physician, but was better known for his passion for Japanese art. He was one of the first Americans to live in Japan in the late 19th century, and he introduced the American public to Japanese art and culture. He worked to establish protections for Japanese art at a time when many Japanese treasures were being sold out of the country in favor of Westernization and modernization. He was a practicing Buddhist and the author of a book on Buddhism called Buddhism and Immortality.

Bigelow lived in Boston and on Tuckernuck Island, was a gifted photographer. You can read more about his life and see a number of his photographs in the recent book William Sturgis Bigelow : the life of a Gilded Age Bostonian, as shown through the photographs he took, the Japanese art he collected, and the letters he wrote to his friends which was edited and designed by Sturgis family descendant Roger Warner. You can also read more about life on Tuckernuck in an article about Bigelow’s Bluff by James Everett Grieder which is part of a collection of essays about Hidden Nantucket.

We are very grateful to all of the Sturgis descendants for their warmth and generosity, and their additional donations to the Library. We are particularly indebted to Roger Warner, Clover Swann, and Molly Warner for organizing such a special event.

Shop in our online giftshop!